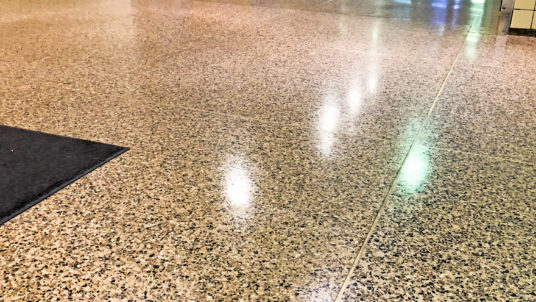 Newark Penn Station, also known as Pennsylvania Station, is a major transportation hub located in Newark, New Jersey. The station is served by multiple rail and bus carriers and is one of Amtrak’s busiest hubs serving the Northeast Corridor. The current facility was dedicated in 1935 and was extensively renovated in 2007, a project that entailed restoration of the façade and preservation of historic interior elements, including plaster ceilings, marble and limestone stairs and landings, and terrazzo floors.

Recently, facility managers began exploring alternatives to the significant expenses entailed in maintaining terrazzo floors. Ongoing honing and polishing portions of floors is a costly, interruptive process. Finding a system that could outperform their current process would have significant affects on maintenance costs. Their search led them to DiamaPro® Systems.

DiamaPro UV-HS Plus is a polyurethane coating expressly designed for concrete and terrazzo floors in applications requiring extreme protection from abrasion and resistance to deterioration from ice-melting chemicals, food and liquid spills. One of the most important features of DiamaPro UV-HS Plus is its extreme durability. DiamaPro’s polymeric structure forms a tightly cross-linked chemical bond near the surface of the substrate that acts as a barrier against moisture and chemicals, as well as the erosive action of heavy foot traffic.

Minimizing downtime for hundred of thousands of commuters

Unlike conventional protective coatings that require hours or days to cure, DiamaPro UV-HS Plus cures instantly upon exposure to a portable UV light. As a result, floors may be returned to service immediately after curing. A DiamaPro Line Striping System is also available to demarcate pedestrian safety zones. This system also cures instantly, ensuring absolute minimal time to install.

DiamaPro® UV Cured Coatings are safe. They have a slip coefficient of friction that exceeds National Floor Safety certification, and all state regulatory requirements. For applications where excessive water is an expressed concern, an abrasive aggregate may be added during the installation to ensure enhanced traction.

Safe and easy to apply with absolute minimal downtime

DiamaPro® UV-HS Plus has a very high solids content with very low VOC’s and no harmful vapors are emitted during application. Because it is a one-component system, no measuring or mixing is required. A coat of DiamaPro® UV-HS Plus is rolled onto the floor, cured with a portable UV light, and immediately returned to service.

The contractor managing the Newark Penn Station project was able to begin installing DiamaPro® UV-HS Plus a mere two hours before the area was completely clear of pedestrians. The area to be coated was divided in halves, enabling the commuters to walk on one side while the installation could continue on the other half. The project was completed well within the allotted time without interrupting traffic flow. The results are extremely durable, sanitary, and easy-to-clean floors that will ensure years of service with minimal maintenance labor and materials.

Check Out our Video on the Penn Station project 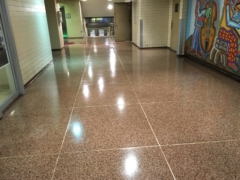 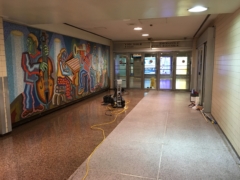