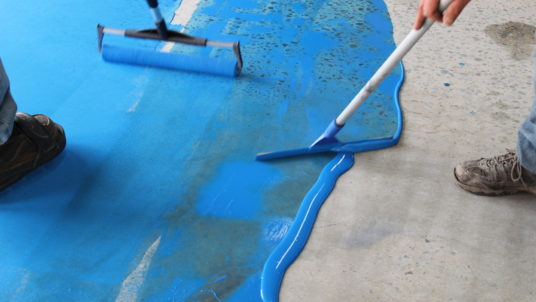 Owners of a construction equipment repair operation in northwestern Pennsylvania recently decided it was time to deal with their cracked, chipped and spalled concrete floor and loading dock. The floor had seen decades of heavy wear and abuse from forklifts and construction equipment, along with ground-in grease, oil and grime. Certainly, the floor could be repaired, but what about restoring it to an acceptable appearance at the same time?

“Making repairs to a distressed concrete floor is pretty much a standard request,” says Scott Thome, product technician for DiamaPro® Systems, a manufacturer of concrete repair and protection materials. “But blending in and masking repairs can pose a challenge at times.”

Proceeding with the restoration, managers at the repair facility had to first decide on an epoxy or urethane-based system. Consulting with Thome, they chose a urethane UV cured topcoat, DiamaPro® UV-HS Plus, to be used in conjunction with DiamaPro® Diama-TLC. “The most apparent factors controlling their decision were abrasion resistance, cure time and fumes,” said Thome. “They wanted to keep the facility in operation during the restoration project. Since DiamaPro UV-HS Plus cures instantly with exposure to a portable UV light, the floor could be done in segments without shutting down the entire building. DiamaPro UV-HS Plus also has a low VOC content and is odorless once cured, so there are no odors or harmful vapors during the installation process. And DiamaPro UV-HS Plus won’t crack, chip or peel, which can be a problem with other coatings.”

First, the worn floor in the repair facility was ground using a succession of diamond tooling. During the grinding process surface stains and grime were removed, and the surface was restored to a uniform flat surface.

Repairing cracks, spalls and joints was the next step in the resurfacing project. DiamaPro Diama-Joint Fill was used in all open control joints providing a smooth transition from slab to slab. DiamaPro Diama-Grout was then used to fill in small spalls and pits.

With repairs completed, the floor was honed with a 70-grit diamond tool removing the excess joint fill and grout leaving a pinhole free surface. The area was then auto scrubbed removing the remaining dust particles. At this stage, DiamaPro Diama-TLC, was roller applied. In addition to imparting a uniform color, the product chemically bonds to the concrete substrate and is completely compatible with the UV cured topcoat.

Different colors of the DiamaPro Diama-TLC were selected to demarcate workstations and forklift traffic lanes within the facility. To achieve the desired saturation, several coats of each color were applied. Approximately one hour was required for drying between coats, the clean-up was extremely easy requiring only soap and water. Because it has a low VOC content and minimal odor, DiamaPro Diama-TLC is an environmentally friendly alternative to solvent-borne colorants.

DiamaPro UV-HS Plus was selected as the protective topcoat for the facility because of its exceptional abrasion and chemical resistance. In addition, instant curing was a critical factor. “Traditional resinous coatings can require hours or even days to completely cure,” said Thome, “necessitating serious interruptions to operations. With UV curing, a floor may be immediately returned to service with minimal downtime.”